I’ve started a new monthly blog over at the excellent Hackney Citizen.  I’m focusing on all aspects of gardening but with an emphasis at the moment on gardening for wildlife as I think this is what we need to put our efforts into – along with protecting and promoting green spaces.  My first column was inspired by the frightening reports of the crash in insect numbers in the last 30 years.  Once they’ve gone, we’re up the creek.  You can read the article here 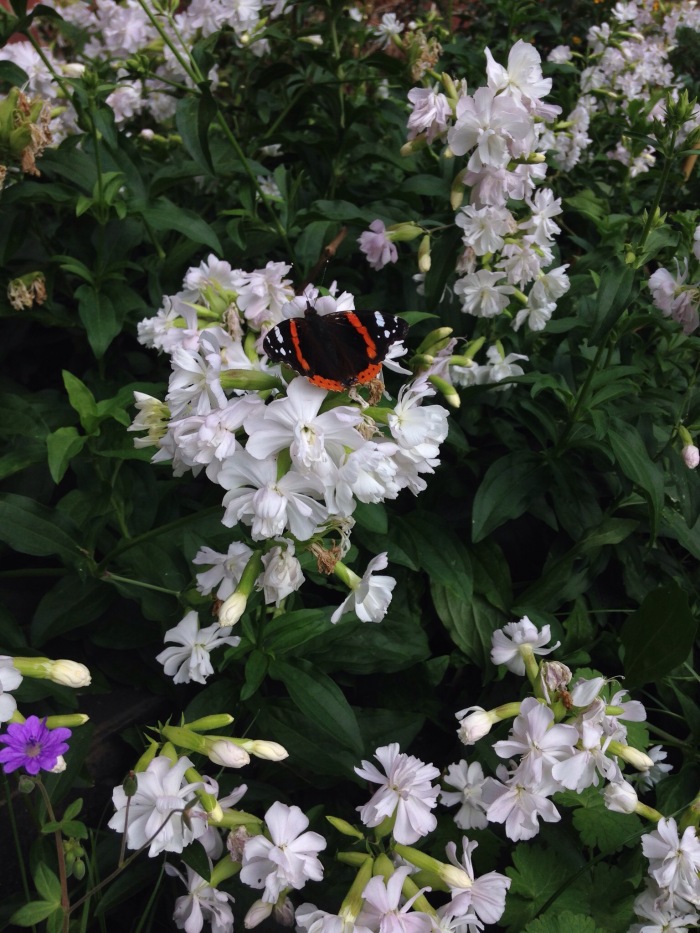 At a recent event at the Geffrye Museum we took our Hackney Colour Wheel to show off and find out what people think we should do with it.  Ideas included handkerchiefs, a kite, parachute, quilt or banner.  Let us know what you think.  In the meantime,  Ruth-Frances has written an article explaining and celebrating the process for the  Royal Society of Chemistry’ s website 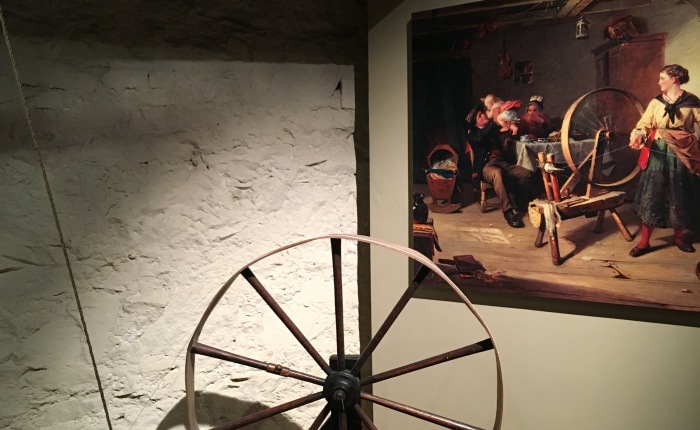 I’ve been telling a story for some years – since I started growing flax, processing it and doing the odd talk and workshop – about Dundee flax mill workers and the origin of the meaning of ‘to heckle’, so Dundee was a place that I was aware was important in the social, cultural and industrial history of linen.  This weekend confirmed the story for me – and much more.

Dundee became important for flax processing both before and after the Acts of Union (1707) which joined England and Scotland’s parliaments as well as their monarchs. Before, linen production developed as the Scots (and Irish) were prohibited from competing with England’s hugely profitable wool industry.  After the Act, Scotland had a new market for its flax and linen products and the industry prospered – especially in Dundee with its maritime links to the Baltic states which could supply the raw material.  Huge mills were built in the early 19th century when the process was industrialised and the (mainly female) workforce – poorly paid and living in appalling conditions – nevertheless became politically important.

Dundee was known as a ‘woman’s town’ or ‘She Town’ as women outnumbered men by three to one in the mills.  Like the cottage industry spinsters before them (women who were financially independent and so didn’t need to get married) Dundee’s mill workers were the main bread-winners and householders.  According to the wonderful Verdant Works Museum, “In the face of such circumstances any fixed ideas of what constituted normal male and female behaviour were dismissed and Dundee women gained the freedom to act in a way which often ignored convention.” The local vicar called them “Over-dressed, loud, bold-eyed girls” and drunkenness amongst them was common.  So these were the women, working on the heckling (hackling in England) machines who would be bold enough to question and confront their ‘betters’.  And these women were the bedrock of the subsequent Suffragette movement in the city.

This social history was part of the magnificent display in the Verdant Works, a jute mill converted into a museum in the 90s.

As the flax supply became more unreliable with turbulence in the Baltic region, the barons looked to the Empire for an alternative and discovered jute from India (and what’s now Bangladesh). It was cheap, versatile and could be made (like flax) into a wide range of goods – sailcloth, rope, canvas for tents in the Crimean war, fire hoses, sacking (the equivalent of the blue carrier bag we get at every corner shop or market), carpet backing and for covered wagons. The city became known as Jutopolis.

The industry employed thousands of people.

The museum houses training versions of all the machinery that would have been used in the 19th century mills – used for batching, softening, carding, drawing, roving spinning, winding, beaming, weaving and finishing.  Excellent volunteers demonstrate their use.

The last jute mill closed in 1999 but many of the buildings remain, converted to housing, offices or studios. 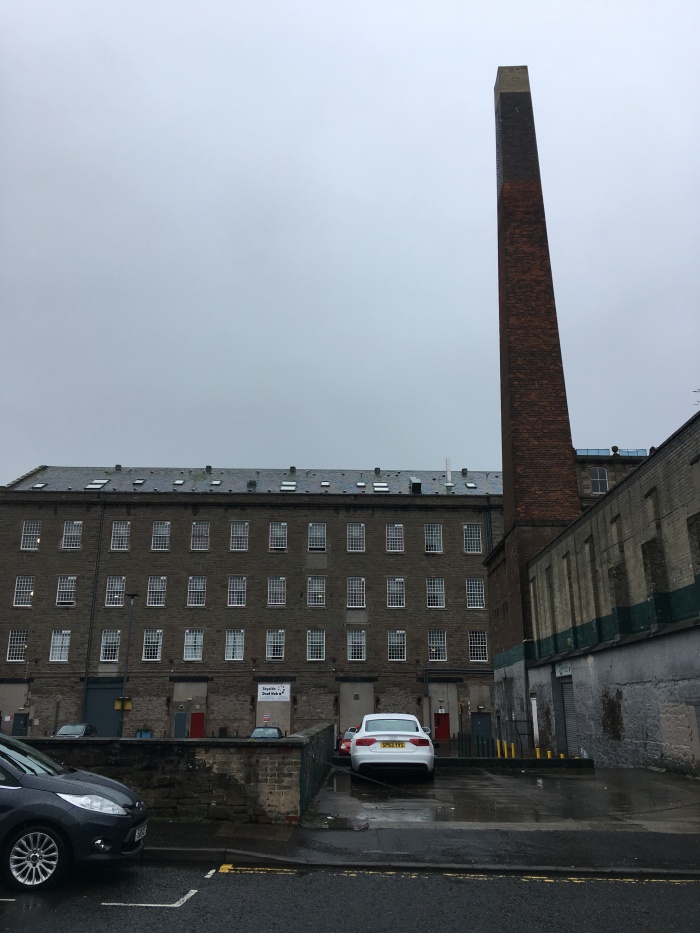 The flax and jute industries have just about disappeared in the UK but there is one local company, Nutscene which does a fantastic and mouth-watering job of (amongst other things) making jute and flax string and sacking. 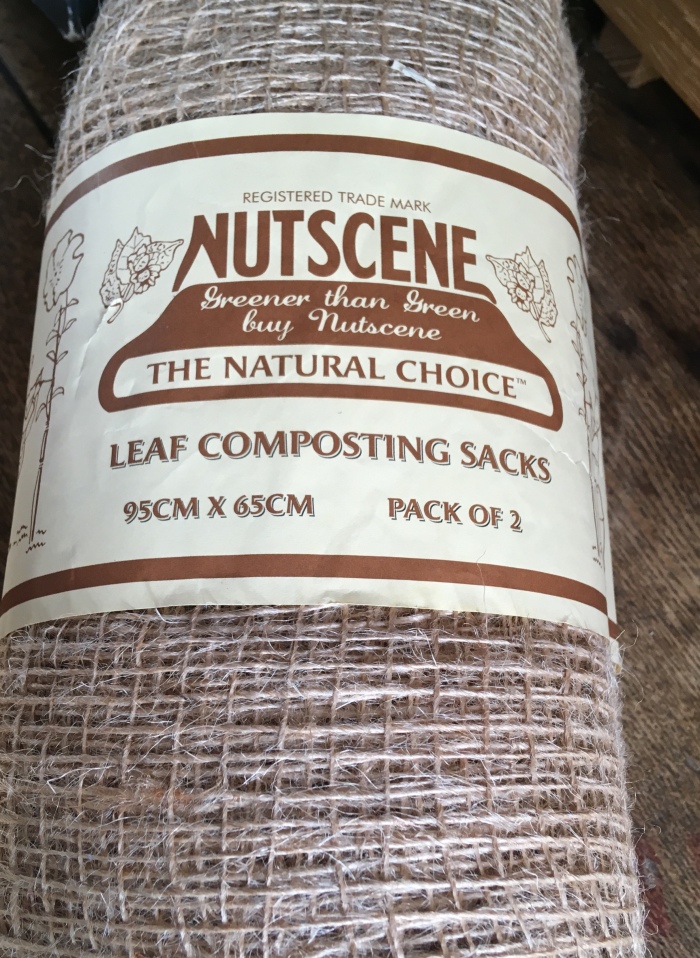 The love of string (I know, a bit odd) was the reason why I first started growing flax in our community garden in Hackney.  I can’t wait for my next visit to Dundee and the stringopolis of Nutscene.

After years of dabbling in natural dyeing, we’ve finally got round to running a comprehensive series of colour workshops using plants from the garden and everyday waste : blue, red, yellow and our black hollyhocks. What spurred us was the closure of the garden. We got notice to leave in April but rather than sob into our sleeves we decided to celebrate what we’ve done over the years and provide a legacy of colour, which we are calling The Hackney Colour Wheel. The plan is to get a spectrum of colour dyed on silk. We haven’t decided how to present it so all suggestions welcome. The workshops are supported by The Royal Society of Chemistry and we hope to show how science and craft can easily connect. Here is some of the dyeing we’ve done so far. 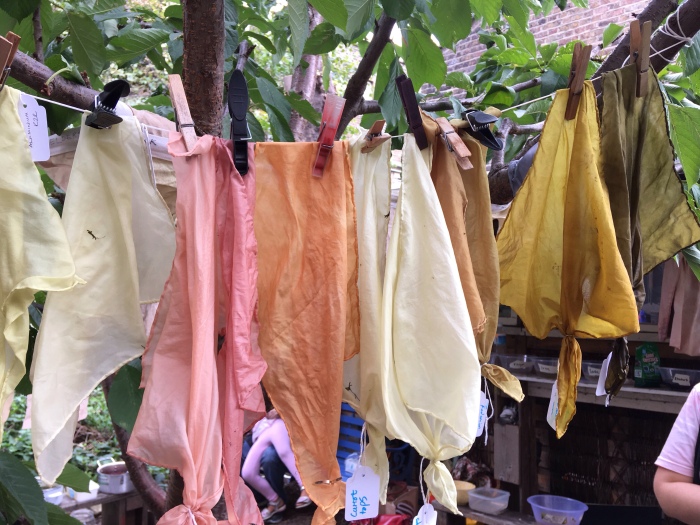 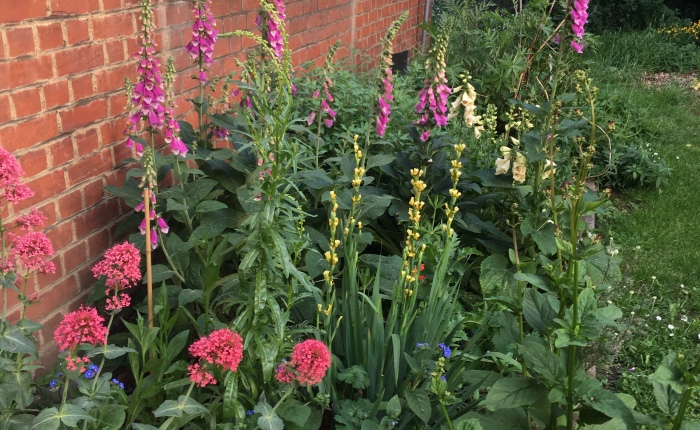 Now this is what the garden is for: respite from all your responsibilities, except plants.  Oh, and each other.

We’ve started, with City and Hackney Carers, a gardening course for unpaid carers.  The idea is to learn about gardening but, more importantly, to have a break in peaceful, undemanding surroundings.  Caring can be relentless; no matter how much you love the person you care for, it can wear you out and, I think, you sometimes feel you are suffering a version of the same affliction.  I feel, for example, I have had a stroke or some kind of brain storm since my mother had hers.  Anyway, gardening, as anyone knows who has been in a garden, is pretty much the solution to any problem and we want more people to feel that calm pleasure you get from being outside in nature – and it’s so nice to be able to share that peace with local carers.

We’ve been lucky with the weather and on our second session we potted up seedlings and made cuttings. 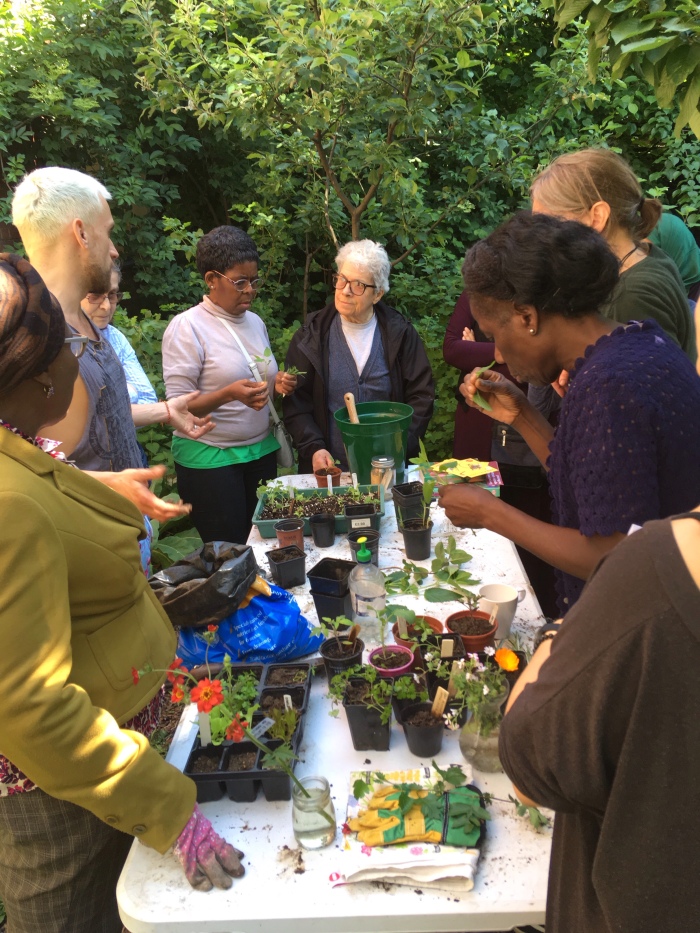 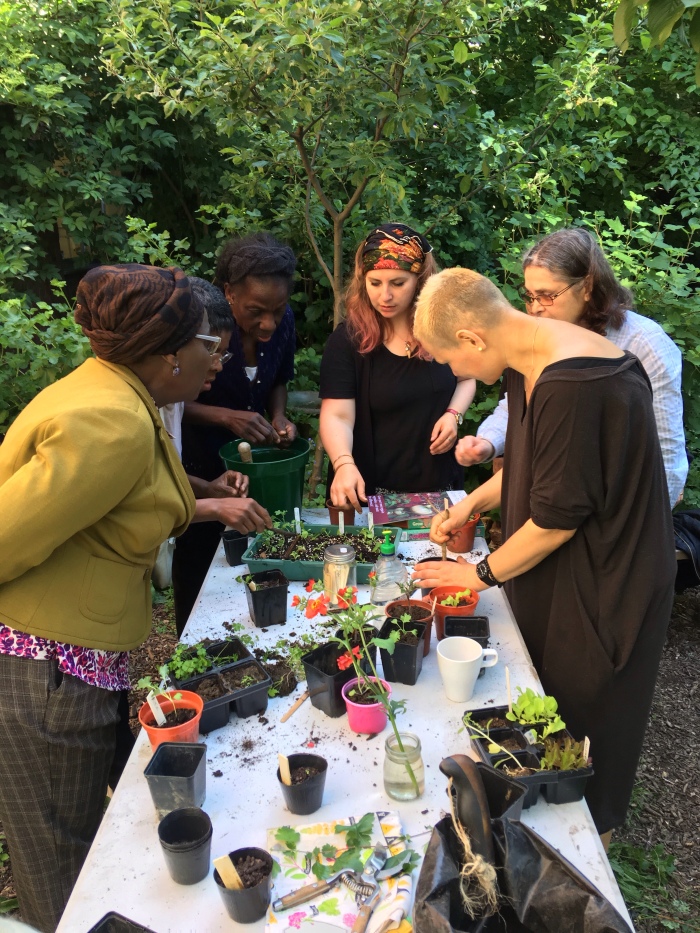 I feel like we have begun to unfurl, like a fern, from the winter. The plants and wildlife have, too, with the frogs getting so amorous in three and foursomes that we’ve had to censor the site and just put one picture up of this more demure one.

Anyway we got some volunteers together (Ruth, Stacey, Jan, Kate and Zainab) to do some tidying, sowing and picking crocus flowers that had gone over to use for dyeing.

We also cut up a milk bottle to use for labels. One small victory over plastic.

Our first foray into SPRING. Hurrah! 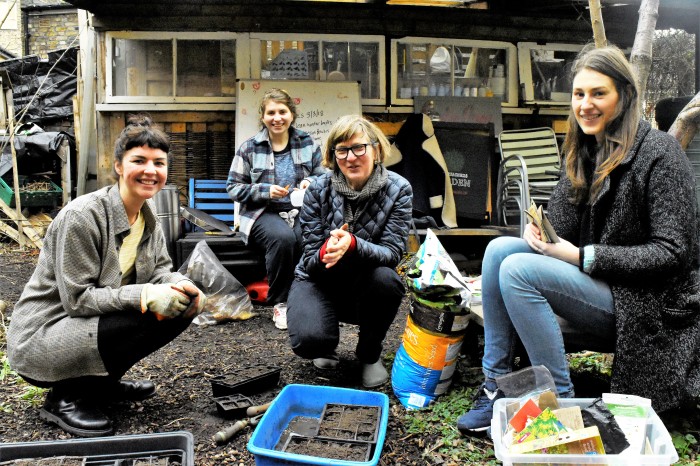 Paul Richens, of the renowned Skip Garden led a workshop at Cordwainers looking at what we can grow at this time of year.  He gave us a fascinating talk which got us thinking about rainfall, light levels, temperature and local conditions – and the useful seasonal benchmark of Guy Fawkes night (5th November) as the real end of the growing season in London.  Still time to put in a crop of radishes.  Even then we can still grow microgreens and plants that will survive – or even thrive in – the winter. Brassicas mostly, winter lettuces and ‘oriental’ greens such as mizuna (if you like that mustardy heat).  We then went to the garden and took root and stem cuttings from mint and a scented pelargonium.

We ran another of our weed walks — or plant safaris — last week.  At these events we look at plant families, how plants grow, their habitats and the great variety and resilience of wild plants. After ambling about inspecting and wondering at the above, we then study the plants further by drawing them.

People get scared of drawing but drawing is the least of it.  The looking is the most of it.  And we want to encourage looking (and the wonder which comes from looking) at the intricacies and complexities of even the ‘simplest’ weed/wild flower.  You should probably spend 60% of your time looking – more than drawing.  If you do that, you are more likely to end up drawing what you actually see, rather than what you expect to see.

One tip Neela Basu, our tame artist, gave us for drawing is to examine the way and direction a plant grows and, rather than draw its face (or flower) first, start at the bottom near its roots and work our way up and try to express the way its energy propels it upwards or around.

Our group, with a wealth of knowledge about growing between them, had a head start with the looking  as they were familiar with the habits and patterns of plants.  They produced some fantastic drawings.

Thanks to Capital Growth for arranging it and to Steve Ellis for the photographs. 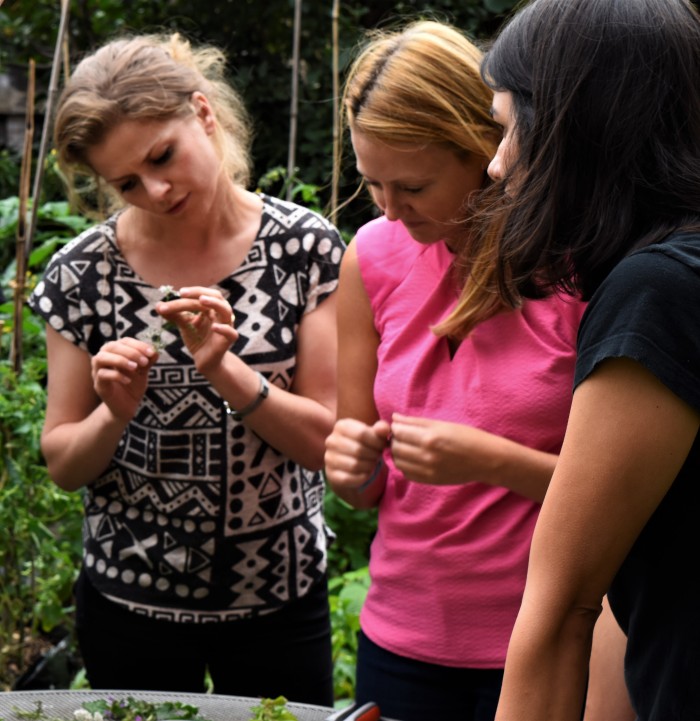 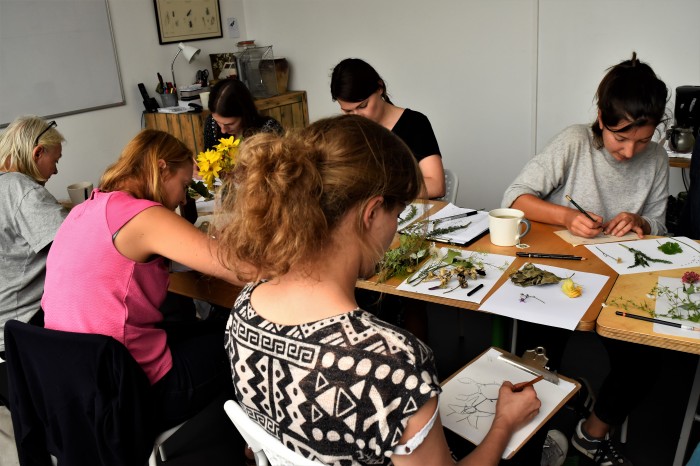 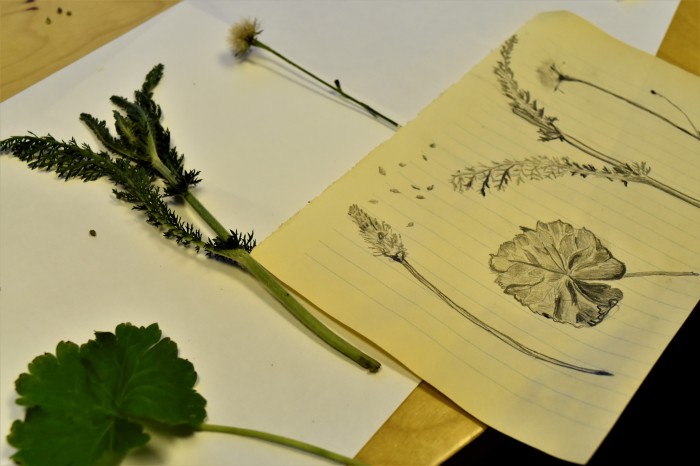 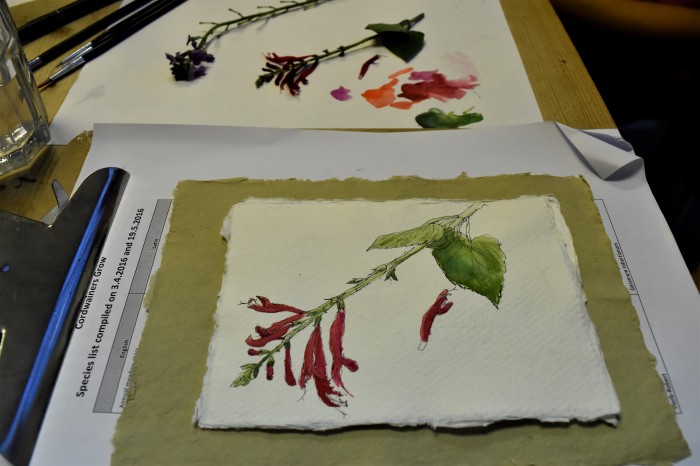 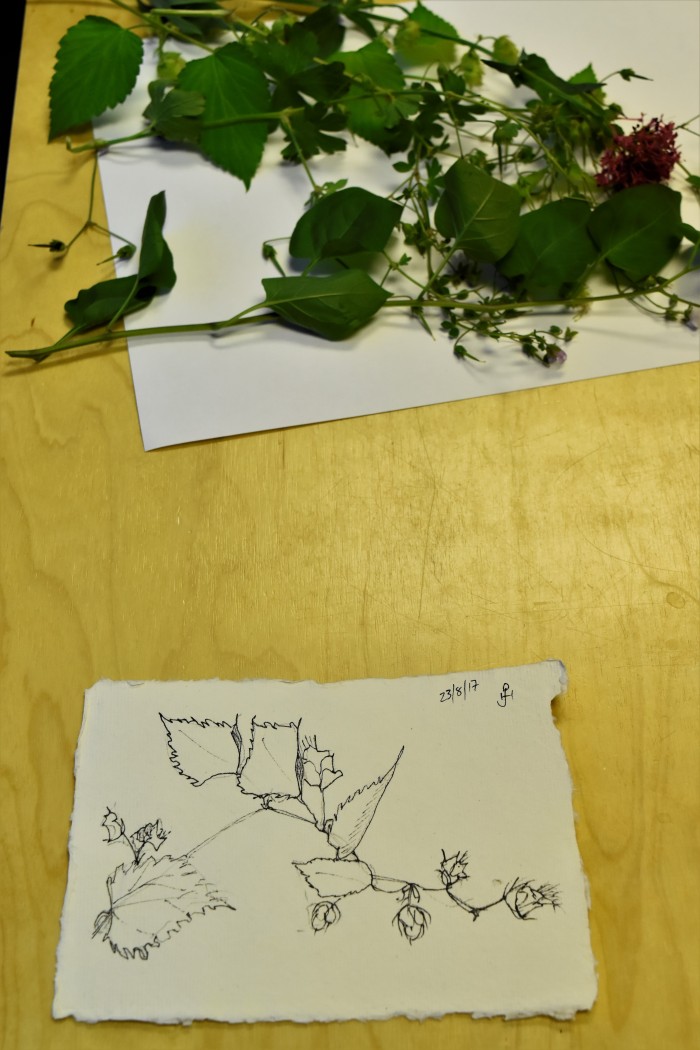 Finally harvested and rippled the flax. Not the best year (too dry early on and not enough weeding!) but but the best group of harvesters!